Nobody creates a narrative around climate change: Amitav Ghosh 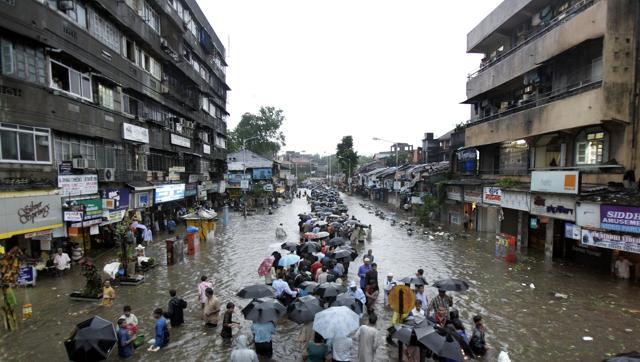 A file photo of Dadar in Mumbai floods of 2005

But there has been nothing on the Mumbai deluge of 2005, or on the Uttarakhand flood of 2013. Even Chennai’s Kollywood, usually given to high drama, has so far ignored the city’s fate last year, when it found itself under water.

It’s the same with publishing. Authors fall over one another to choose love and war as their themes (Love Story, Arms and the Man, A Farewell to Arms, Half Girlfriend…), or crime (too many to name). But they pay little heed to climate change, though it may be an even bigger threat than love, war, or crime.

This baffles Amitav Ghosh, who is today perhaps the best-known Indian writer in English. “Is it difficult to think of a love story somehow interrupted by the great Mumbai deluge?” he says, as we sit down to chat over lime and soda at the open-air restaurant in Kolkata’s Tollygunge Club.

The deluge, to Ghosh, was an inconceivable catastrophe. “Yet I don’t know of a single book, film, or documentary about it. Nobody seems to be able to create a narrative around climate change.”

He hopes that his new book on the subject, The Great Derangement, which marks Ghosh’s return to non-fiction after a decade, will change some of that. “I hope it will begin a conversation. This issue of what climate change means for our future is not discussed at all. That’s frightening.”

Ghosh talks about farmers in Tamil Nadu who use up all the subsidised electricity they get to pump out water, which they sell in the market. If they are asked why they do it, they say that if they don’t, their neighbour will. A large percentage of irrigation water in Maharashtra goes into sugarcane, a water-intensive crop which must not be grown in the water-deficient state. “We need a serious discussion on water use,” he says.

Two of Ghosh’s more vivid childhood memories are learning to write on a slate and the all-around culture of thrift. “There was an emphasis on never being in debt, and saving not just money but everything around you. You would squeeze a tube of toothpaste until there was nothing left,” he says.

Ghosh is only 60 – a very-well-spoken 60 with a thatch of wavy white hair – but he cannot stop marvelling at how far we have come from the days of his childhood. Young people these days are constantly bombarded by advertising that thrusts easy credit and consumerism upon them.

The Anglo-American form of capitalism, built around extreme exploitation of natural resources, has created a culture of waste. Its roots lie in British imperialism, whose hallmark was sucking its resource-rich colonies dry. Even though the sun has set on the empire, the general mindset remains that there is no limit to the earth’s bounty. “Once you get into the culture of waste, it’s very difficult to get out of,” says Ghosh.

Economic power has shifted to developing countries like China and India, which have a pressing need to grow their economies so they can pull their population out of poverty. That entails digging out more coal and burning it, cutting trees down for construction, and tearing down mountains to build dams and bridges. The developed countries have done their share of the damage, now the developing ones believe it’s their turn. They feel emboldened, Ghosh notes in his book, because their people are anyway used to hardship; a little more will not hurt much. The rich, fattened on life’s luxuries, have more to lose. In this race, someone somewhere invariably wants to overreach himself. Take the example of Volkswagen and its cheat device, a software that aced emission tests.

Read:NGT asks Volkswagen not to sell cars with ‘cheat device’

That raises the role of technology. Man seems to believe that, armed with the latest advancements, he can tame nature and shape his own destiny. The earlier generations were wise enough to keep their distance from the sea. Even the busy port cities, as they came up, built their settlements some way away from the shore.

Not so modern man. How do you think Mumbai’s Bandra Reclamation got its name? It’s among the large tracts in the city reclaimed from the sea in the last 40 years. “You can be sure the sea will claim it back,” says Ghosh.

Ghosh has closely examined the two. “I have judged it entirely on the writing, I have some kind of expertise in that,” he says, and smiles.

The Paris Agreement, written by experts, has ended up being a document written for bureaucrats. Its language is stolid, with some sentences running into several pages. And what those sentences say is worse than how they say it.

“It creates a new liberalisation of climate change and opens it to businesses, mega corporations, and billionaires. What is more disturbing is its complete refusal to even invoke the term, ‘climate justice’,” says Ghosh. The Paris Agreement talks about poverty as something that can be fixed. There is no acknowledgement that something has gone wrong.

The Pope’s document, says Ghosh, is remarkably enlightened. It conveys complex ideas with extreme simplicity. That’s something few governments are able to do. In fact, governments tend to do the opposite. They make rhetorical gestures towards climate change, then go ahead and issue a series of incentives for coal mining, fracking, or offshore drilling. “We are trapped in a model of economics and politics that does not provide any solutions,” says Ghosh.

he ordinary Indian believes climate change is a problem for developed countries, that for us it is about survival. “But survival of whom?” says Ghosh. “Many businesses decided to skip the city after 2005. This has an impact on the life of people in Mumbai as much as on a drought-stricken farmer.”

Pope Francis gives him hope. Maybe the leaders of religions will rise and mobilise a mass movement, at which religious groups excel, on climate change. Hindu texts are full of respect and worship for the elements. And mythology is full of people like the saint, whose name Ghosh forgets, who used to eat his meals with a needle next to his plate so that he could pick any grain he might have spilled.

The fight against climate change is about leaving no grain unpicked.