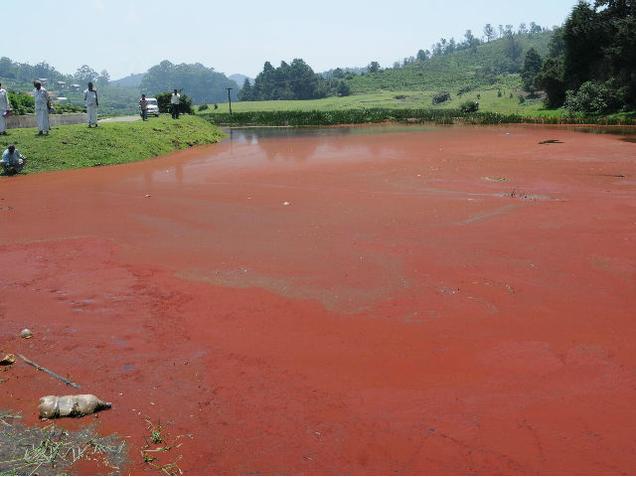 With the colour of water in a check dam in the Nilgiris district turning red, government officials inspected it on Sunday and found that it occurred because of pollen emitted by a weed, but concluded that it was a seasonal phenomenon.

Nilgiris Collector P. Sankar said that a team of officials from the Departments of Health, Forest and Revenue besides the Tamil Nadu Pollution Control Board inspected the check dam, near TR Bazaar, on Sunday.

Water from the check dam was used neither for irrigation nor for drinking. It was used by the Tamil Nadu Generation and Distribution Corporation (Tangedco) for the Glenmorgan dam to generate hydro-electric power.

C. Badrasamy, District Forest Officer Nilgiris South Division, said the weed that emitted the pollen usually settled in the riverbed, which was usually dry during summer. Due to unseasonal showers this year, the check dam was filled with water and the pollen had given a red hue to the water surface.

“All the fish and the aquatic vegetation in the check dam appear healthy and cattle were drinking water,” he said.

A TNPCB official said that no industry was located within the five kilometre radius of the check dam, ruling out the possibility of effluents mixing in water.

The source points were also investigated and no toxic impurities were detected. Water samples had been taken and would be tested at the TNPCB’s Advanced Environmental Laboratory in Coimbatore.