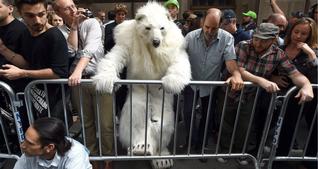 A man dressed as a Polar Bear climbs a barricade as protesters take part in the ‘Flood Wall Street’ demonstrations on Monday. —PHOTO: AFP

The largest gathering of world leaders on climate change opened at the United Nations on Tuesday amid calls for action to put the planet on course toward reversing global warming.

U.N. Secretary General Ban Ki-moon is hosting the summit of 120 leaders, the first high-level gathering since the Copenhagen conference on climate change ended in disarray in 2009.

Diplomats and climate activists see the event as crucial to building momentum ahead of the Paris conference in late 2015 that is to yield a deal on reducing greenhouse gas emissions after 2020.

But no-shows from the leaders of China, the world’s biggest polluter, and India, the number three carbon emitter, are casting a cloud over the event.

Leaders were to take turns at the podium, from President Barack Obama representing the world’s second biggest polluter to Prime Minister Enele Sopoaga of the Pacific island-nation of Tuvalu, which faces the prospect of being wiped out by rising sea waters.

Despite much enthusiasm from climate activists for the summit’s potential to create impetus, some see the event as falling short of what is needed to get serious about the environment.

The summit talks are separate from the negotiations held under the U.N. Framework Convention on Climate Change (UNFCCC), which will culminate with the Paris conference in December 2015.

The 1997 Kyoto Protocol, the first international agreement to reduce emissions, has commitment periods, the last of which expired in 2012. But it has since been renewed. However the protocol was never ratified by the United States.

Attempts to negotiate a new treaty ended in fiasco at the Copenhagen conference in 2009 and the pressure is on to avoid a repeat of that failure at the U.N. talks in Paris next year.

“As an actor, I pretend for a living. I play fictitious characters often solving fictitious problems,” the actor told the summit of 120 leaders.

“I believe mankind has looked at climate change in that same way — as if it were fiction.” — AFP