Chennai is too big to fail

Chennai is too big to fail 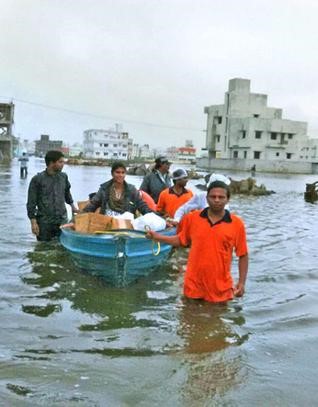 The Chennai floods have left some important queries unanswered. They are: What are the chances of the disaster repeating? What are the geographical insights we derive? Could such big problems be solved properly? And, finally, what are the implications of the crisis on real estate?

Between 1901 and 2010, October-December accounted for 57 per cent of Chennai’s annual rainfall. Over these decades, population, vehicle count, infrastructure, temperature, and rainfall increased manifold.

Sadly, Chennai is severely deprived of drinking water despite frequent, heavy rain. Regretfully, its lake managers are attuned only to managing drinking water shortage. The Chembarambakkam lake authorities felt compelled to release water when its water tank became 86 per cent full. Included within this 86 per cent was 40 per cent silt. Had the tank been periodically de-silted water discharge could have been avoided.

Chennai’s estimated losses from the floods were 4.5 per cent of its GDP. In 2014-15 Tamil Nadu’s economy impressively grew 14.34 per cent by borrowing heavily. Now, it needs to borrow more to fix the flood’s after-effects.

Since Chennai’s average height above sea level is 22 feet, any plot of land below that is probably low-lying. The height of the residence should always be higher than the height of the road. Avoid plots on lakes, river beds, lake banks or river banks. Chennai has three types of soil — sandy, clayey and rocky.

In terms of stormwater drainage sandy areas are technically, financially and operationally the simplest requiring mainly good wells. Clayey areas need only good tanks. Rocky localities require extremely costly and technically well-designed stormwater drains. Wells are the cheapest, tanks slightly costlier, drains the costliest. The worst rocky areas are located next to spoilt marshlands or flood plains (kazhiveli) and water bodies. The worst floods have occurred in such areas. Real estate’s biggest irony is that the most unsafe rocky areas are also the costliest!

The CMDA lists 12 per cent of areas (by number) as flood-prone. Which means around a fifth of Chennai’s residential areas are low-lying. Stormwater drains have lagged 40 years behind required capacity.

Chennai’s biggest source of drinking water (Chembarambakkam) and its biggest water drainage outlet which drains water into the sea (Adyar River) are geographically adjacent. This needs to be corrected. Rather than being one big Adyar river, could it be split into more tributaries for quicker drainage and easier cleaning? Adyar also suffers several illegal inlets for sewage drainage and storm water.

Have all the city’s lakes been battered by rain or mismanaged by civic authorities? No. There is no correlation between the size of the lake and the extent of flooding. Thaiyur lake (Kelambakkam) burst in 2005 when the rain was lesser, but not in 2015 when rains were heavier. Some lakes have been well managed while others have not.

Lakes whose base and banks were encroached upon created havoc. This time, the State’s second largest manmade lake at Madhuranthakam, which was was not encroached, did not pose problems.

Agricultural scientist MS Swaminathan once said Chennai could experience a sea level rise of 1 metre by 2020. This would make flooding many times worse than 2015. So, going forward, the government needs to quickly decide the new plinth level in constructions; how much depth piling should be done and what the elevation should be.

Chennai attracts 45 per cent of all overseas health tourists coming to India, around 35 per cent of domestic health tourists and issued the third largest number of visas on arrival in 2014. It is one of the four Indian cities connected globally by undersea fibre-optic cables, a landing point of major submarine telecommunication cable networks and hosts India’s second largest film industry.

Chennai is too big to fail; too important to be neglected. Corporates (especially and including IT sector) have recognised this and contributed hugely to relief funds and works, which are still on. It is both irony and a blessing to the Chennai-ite that such iconic corporates are located in flood-prone zones.

The 2015 rains have also cleaned portions of drainage systems (Adyar and Cooum) saving civic authorities years of time and tons of money! The rains in 2015 have left us with pains, gains, insights and a good future.

The writer is a real estate consultant based in Chennai

(This article was published on March 23, 2016)
Link : http://www.thehindubusinessline.com/opinion/chennai-is-too-big-to-fail/article8390251.ece
FacebookTwitter