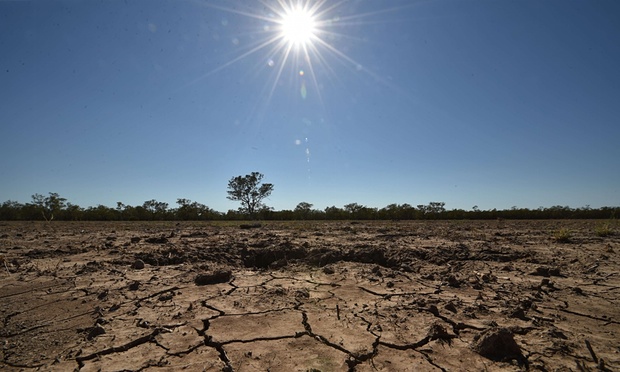 Extreme drought threatening food security is one dangers of climate change that needs the same risk assessment as nuclear weapons, according to a new UK Foreign Office report. Photograph: Peter Parks/AFP/
The threat of climate change needs to be assessed in the same comprehensive way as nuclear weapons proliferation, according to a UK foreign minister.

Baroness Joyce Anelay, minister of state at the Commonwealth and Foreign Office, said the indirect impacts of global warming, such as deteriorating international security, could be far greater than the direct effects, such as flooding. She issued the warning in a foreword to a new report on the risks of climate change led by the UK’s climate change envoy, Prof Sir David King.

The report, commissioned by the Foreign Office, and written by experts from the UK, US, China and India, is stark in its assessment of the wide-ranging dangers posed by unchecked global warming, including:

The world’s nations are preparing for a crunch UN summit in Paris in December, at which they must agree a deal to combat climate change.

Monday’s report states that existing plans to curb carbon emissions would heighten the chances of the climate passing tipping points “beyond which the inconvenient may become intolerable”. In 2004, King, then the government’s chief scientific adviser, warned that climate change is a more serious threat to the world than terrorism.

“Assessing the risk around [nuclear weapon proliferation] depends on understanding inter-dependent elements, including: what the science tells us is possible; what our political analysis tells us a country may intend; and what the systemic factors are, such as regional power dynamics,” said Anelay. “The risk of climate change demands a similarly holistic assessment.”

The report sets out the direct risks of climate change. “Humans have limited tolerance for heat stress,” it states. “In the current climate, safe climatic conditions for work are already exceeded frequently for short periods in hot countries, and heatwaves already cause fatalities. In future, climatic conditions could exceed potentially lethal limits of heat stress even for individuals resting in the shade.”

It notes that “the number of people exposed to extreme water shortage is projected to double, globally, by mid century due to population growth alone. Climate change could increase the risk in some regions.”

In the worst case, what is today a once-in-30-year flood could happen every three years in the highly populated river basins of the Yellow, Ganges and Indus rivers, the report said. Without dramatic cuts to carbon emissions, extreme drought affecting farmland could double around the world, with impacts in southern Africa, the US and south Asia.

Areas affected by the knock-on or systemic risks of global warming include global security with extreme droughts and competition for farmland causing conflicts. “Migration from some regions may become more a necessity than a choice, and could take place on a historically unprecedented scale,” the report says. “It seems likely that the capacity of the international community for humanitarian assistance would be overwhelmed.”

“The risks of state failure could rise significantly, affecting many countries simultaneously, and even threatening those that are currently considered developed and stable,” says the report. “The expansion of ungoverned territories would in turn increase the risks of terrorism.”

The report also assesses the systemic risk to global food supply, saying that rising extreme weather events could mean shocks to global food prices previously expected once a century could come every 30 years. “A plausible worst-case scenario could produce unprecedented price spikes on the global market, with a trebling of the prices of the worst-affected grains,” the report concludes.

The greatest risks are tipping points, the report finds, where the climate shifts rapidly into a new, dangerous phase state. But the report also states that political leadership, technology and investment patterns can also change abruptly too.

The report concludes: “The risks of climate change may be greater than is commonly realised, but so is our capacity to confront them. An honest assessment of risk is no reason for fatalism.”