India in top 20 countries that dump maximum plastic in oceans

India in top 20 countries that dump maximum plastic in oceans

For a pack of condoms, beach goggles, chewing gum boxes, water bottles and bright beach toys to land up on one table appears strange, but that’s what plastic debris researcher Jenna Jambeck found — a mixed bag of material she has carefully collected from across coastlines. 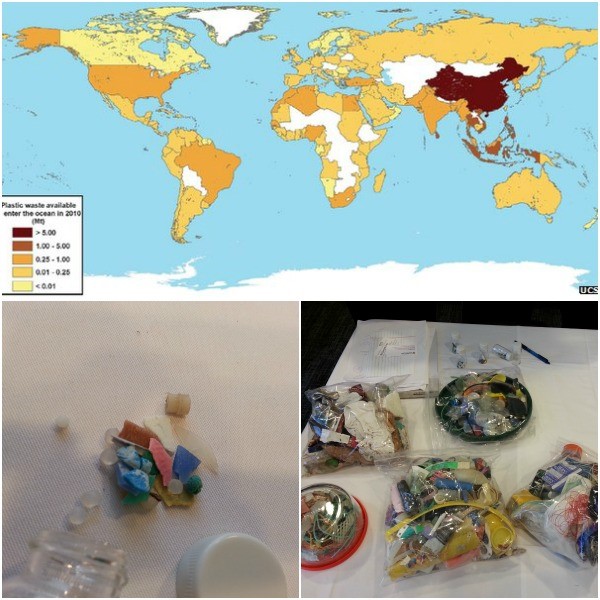 For a pack of condoms, beach goggles, chewing gum boxes, water bottles and bright beach toys to land up on one table appears strange, but that’s what plastic debris researcher Jenna Jambeck found — a mixed bag of material she has carefully collected from across coastlines.

In a new study published in Science Journal, researchers have quantified the amount of plastic entering oceans from coastlines of 192 countries. India is 12th in the list of top 20 countries notorious for disbursing the maximum amount of plastic waste into the high seas from their respective coastlines. China ranks first, followed by countries in Southeast Asia, Sri Lanka, Egypt, Nigeria, Bangladesh and South Africa.

“The top 20 countries, including India, account for 83% of all the mismanaged waste available to enter the ocean,” said Jambeck, lead author of the study and a researcher at University of Georgia in the US.

China tops the list, having sent an estimated 1.32 to 3.53 MMT of plastic trash into the sea, Indonesia comes a distant second at 0.48 to 1.29 MMT, followed by The Philippines, Vietnam, and Sri Lanka. India is twelfth on the list, Brazil is at 16, and for a change, the US is at 20. 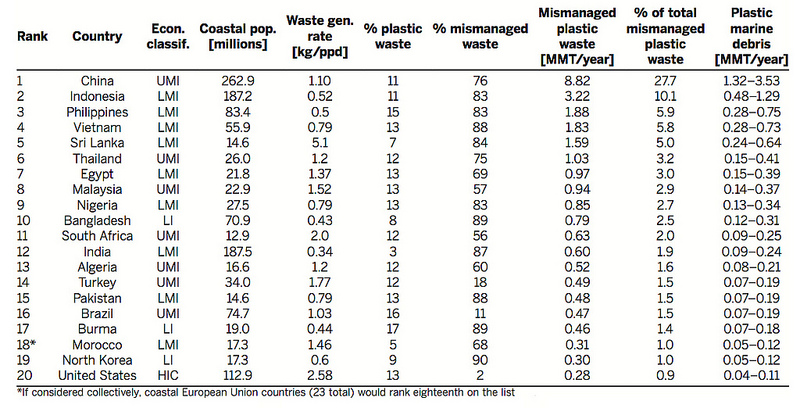 What does the study show?The study calculates that of the 275 million metric tons (MT) of plastic waste generated by 192 countries in 2010, nearly 8.8 million MT entered the world’s oceans and seas, including the Indian, Atlantic and Pacific oceans and Mediterranean and Black seas. The data of coastal population and per person waste generation rate, including plastic for each country, was analysed.

Could the stats be inaccurate? India comes only second to China in terms of number of people residing on coastline. While China has a coastal population of 26.29 crore, India’s is 18.75 crore. “With the available data, that one person generates 0.34kg waste every day in India, of which three per cent is plastic waste, we ranked India 12th. But with India’s coastal population next only to China’s, these statistics provided by the Indian authorities are contestable,” said Jambeck.

She criticised India for lack of available national data and a possible under-reporting of statistics to the World Bank, in terms of kilos of waste generated per person per day and the share of plastic waste therein. Neglected SWM scheme a root of the problem While less than 40% of waste in Europe is recycled, in India, recycling rates of garbage are unknown. As many as 1.21 crore people reside in Mumbai on the west coast of India and account for 6% of India’s coastal population. Municipal corporators in the city are disappointed at how the Brihanmumbai Municipal Corporation (BMC) is handling the Solid Waste Management (SWM) programme.

In Mumbai, segregation of recyclable and non-recyclable waste is not implemented at a household level, despite BMC allotting a whopping Rs2,231 crore in 2015-16 budget for SWM, an amount that has risen by 31% from previous year’s Rs1,525 crore. “Garbage disposal under SWM scheme is a big disappointment and has been neglected completely. The civic body had committed to more transfer stations and decentralisation of garbage stations last year. This has not happened. No legislation that enforces or motivates segregation at household level exists, neither is there any punitive action. Till date, we do not have a BMC-owned segregation facility in Mumbai. The civic administration is bankrupt as far as innovative ideas are concerned,” said BMC corporator Rais Shaikh from Kurla.

Down in the dumps Researchers say that illegal dumping of garbage in the oceans is rampant in all countries. The study accounts for all plastic that may be lurking in the depths of the seas. Quantity of plastic entering the oceans from land has never been measured before, researchers said. The average depth of oceans across the world is 14,000 feet. “How are we going to remove plastic once it has entered the ocean? We should prevent it from entering the seas in the first place by uplifting the SWMinfrastructure at a local city level,” said co-author of the study Kara Lavendar Law, an oceanographer with the Sea Education Association.

The killer called plastic That plastic lurks around in the ecosystem for many years without degrading into its core elements carbon and hydrogen is known. Law has been quantifying amount of plastic dumped in Atlantic Ocean for the past 25 years. “During our assignment, we are out of sight of land, deep into the oceans for six weeks at a stretch. We would tow a metre-wide net with a mesh and a collecting jar to gather plastic samples from the upper 30 metres of the sea surface and measure the number of samples collected as compared to the surface of water in which the samples were scouted for,” she said. “Plastic breaks into tiny fragments and lingers in the seas, some types of it float, while others settle on the surface of the ocean. They are ingested by hundreds of species of marine life, causing harm to them. Plastics do not belong in oceans.”

620% The increase in global production of plastic since 1975