Speaking at a colloquium organised as part of the diamond jubilee year of the formation of the Department of Atomic Energy, Bhattacharya said that all the nuclear reactors in the country were safe and there were no major nuclear accidents had been reported so far in the country.

He also asked the people not to worry about the conditions of the nuclear reactors as they were set up based on international safety standards.

Under the IAEA scale nuclear accidents were classified under seven categories ranging from 0 to 7.

In the past five years, 160 incidents had been reported, and among them 154 were classified under category zero, claimed the AERB vice-chairman.

Speaking about the Kudankulam Nuclear Power Plant (KKNPP),  Bhattacharya claimed the reactors were set up based on international safety standards and were completely risk free.

AERB had been given a site clearance for setting up units III and IV at KKNPP, said Bhattacharya.

When asked whether thorium was smuggled out of India through the Thoothukudi Port, the Atomic Energy Regulatory Board vice-chairman claimed that none of the radioactive materials including thorium could be smuggled out of country as there were proper surveillance mechanisms available at every port. 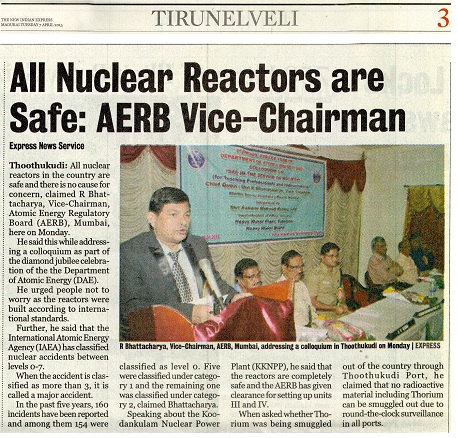