The scars of the tsunami of December 26, 2004 are still evident on the agricultural lands of the region.

It is against this backdrop that authorities are engaged in broad-based efforts to restore the touch of fertility to the once bountiful fields.

During the tsunami, water ingress was recorded up to 1-3 km inland from the coast in Tamil Nadu and Puducherry which have a coastal length of 1025 km. The average height of tsunami was 7-10 m. The total number of villages affected was 376 and 33 in Tamil Nadu and Pudhucherry respectively.

Saline water incursion was around 1 km into the southern coastal areas of Puducherry and this rendered the soil with high levels of salinity and the land uncultivable. The deluge damaged rain water harvesting ponds which were the main source of irrigation of casuarinas plantation in areas such as Narambai, Pillaiyarkuppam, Manapet. It turned them saline and unfit for irrigation. Rare wildlife fauna and flora such as rabbit, fox, many reptiles and herbs are no longer present there. In the once fertile coastal villages paddy and manila crop were grown through pond irrigation. The ponds dotted across the coastal area which gave clean water to farmers were totally damaged after the tsunami.

Sharing his experience, K. Devaraj, farmer of Pillaiyarkuppam, said, “After the tsunami, we were unable to grow any crop. Our ponds either became saline or damaged.”

Several villagers even attempted to sell their land to real estate agents at rock bottom prices .

G. Pattabiraman said, “Our livelihood was at stake. Whatever we sow would wilt immediately because of soil salinity. Now we hope to recommence our farming activities, thanks to the initiatives of government.”

The authorities have begun to sink a deep bore well near Manapet village. It will supply water for irrigation for nearly 50 acres of land. Tsunami affected farmers had represented to the Government of Puducherry to construct a community bore well.

N. Ramesh, Environmental engineer of Department of Science, Technology and Environment said, “After tsunami struck here several farmers remained clueless on recommencing their occupation. Now we are taking steps for community farming through pipeline water supply from the bore-wells.”

The Agriculture Department has been taking several initiatives to revive agriculture in the coastal area.

A. Ramamurthy, Director, Agriculture said, “We have been continuously taking initiatives to reclaim the land and restore agriculture activities.’By bringing in a community bore-well irrigation, we will be able to supply water to over 50 acres of land. We undertook measures such as removal of silt settled on the soil, leaching the excess salinity and green manuring so that land becomes cultivable.” 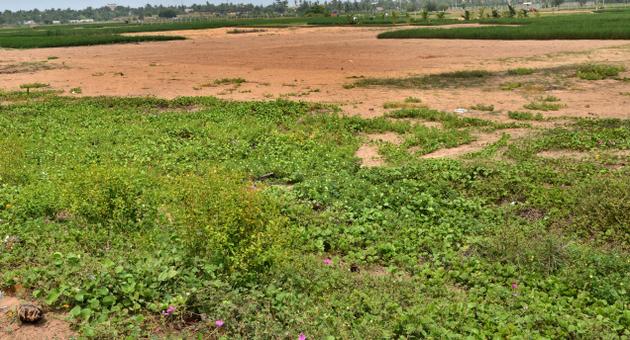